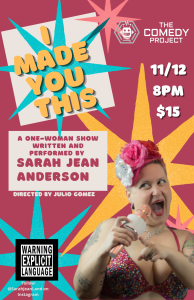 ONLINE TICKET SALES ARE DOWN –

PLEASE ARRIVE 10-15 MINUTES EARLY TO PURCHASE THEM AT THE DOOR. Thank you!

From 2010-2013, Sarah Jean toured the US extensively as a character actor & burlesque comedienne with Super Happy Funtime Burlesque and as an improv actor with The Murder Mystery Company.

She has been a member of several improv and sketch comedy groups including Old Lady Monday, and the all-female comedy troupes Funny Girls, and Comedy Coven (Lansing, MI.) Voted Best Comedian by West Michigan’s Revue Magazine in 2016, she placed in the Best Artist category in 2017.

She has written and produced 13 original comedy shows since 2008, including One Pretty Funny Girl (2008) and After School Special (2014).

Rita reads you a poem about love!
An old lady gives womankind an enthusiastic pep talk!
An overly anxious woman struggles through a holiday speech!
Sarah Jean will dazzle you with her story about doing acid on the river!
And a sketch revealing the real story of how “Photograph” by Nickelback was written!

ONLINE TICKET SALES ARE DOWN –

PLEASE ARRIVE 10-15 MINUTES EARLY TO PURCHASE THEM AT THE DOOR. Thank you!