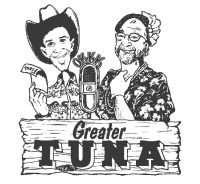 Greater Tuna is one of the most produced plays in American theatre history and all weekend long, we’re happy to feature the Maverick Productions staging of this long-running off-Broadway hit!

This play features just two actors, Joe Adams and Tom Cox, who portray the entire population of Tuna, Texas in a tour de farce of quick-change artistry. Two actors, 20 characters, and a barrel of laughs, y’all.

The Director, Jennifer Willis Adams
“Honestly, I don’t want to say how long I’ve been in this business because it makes me feel old. Feeling old doesn’t suit me… my imagination is as strong as a child’s! Getting lost in a scene and transcending the veil of reality is my pure bliss. Artsy-Fartsy as it may be, I know this world is a stage.”
With her theatrical career spanning over 4 decades, Jennifer has served in every capacity at a theatre that one can imagine. From her scene stealing performances and sold out theatrical classes, to her transformative board positions, Jennifer is still full of passion for the theatre! In 1993, as a senior in high school, she directed Joe Adams, a freshman with an orange mullet, in a production of Rainbow’s, Magic & More. In 2007, she married him. Today, she is blessed to work with him again. “It’s been 29 years since I’ve directed my husband… this time around it’s better because I can kiss him whenever I like.”

Joe Adams
Joe Adams grew up in theatre and feels most at home performing for others. In his time, he has been blessed to take part in this beautiful art form and has participated in everything from Shakespeare to Lil Abner. Having relocated to the Grand Rapids area in 2020 to serve the beautiful and amazing team at Toyota of Grand Rapids, he finds himself falling in love with Michigan and Grand Rapids more with every passing day. His true passion is his amazingly understanding and supportive wife, for whom he believes the sun rises. Joe hopes you enjoy and are entertained by this performance of Greater Tuna.

Tom Cox
Tom started acting at the tender age of 13 at The Kalamazoo Civic Theater. He spent 5 years in the company, learning all about the theater; acting, singing, dancing, tech, lights, set construction and costuming. He spent a year in college adding opera to his resume with performances of Die Fleidermaus and The Tender Land. He then moved to Florida and worked the dinner theater circuit and earned his Equity card, becoming a professional actor. Most recently Tom has been doing voiceover work for several Audio Books and a short for AdultSwim, called The Telenoid. His favorite roles to date are Caiaphas in Jesus Christ Superstar and PT Barnum in Barnum.