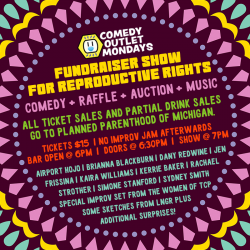 Every Monday, The Comedy Project turns over the stage to Comedy Outlet Mondays(COM) for their weekly, one of a kind, comedy variety show! COM features new improv, sketch, standup, music, and experimental comedic acts of every kind!

HOWEVER… on June 27th, COM will be putting on a special show for Reproductive Rights, featuring some of our favorite funny women & others who would be most affected by laws that restrict reproductive freedom. All money from tickets sold, and a portion of drink sales from a special cocktail at TCP’s Moonshine Bar, will go towards the local chapter of Planned Parenthood.

There will also be a special raffle/auction to raise additional funds.

The lineup will include

A special improv set from the Women of TCP

Plus some additional surprises!

NOTE: There will be no jam afterwards

Email comedyoutletmondays@gmail.com for any questions